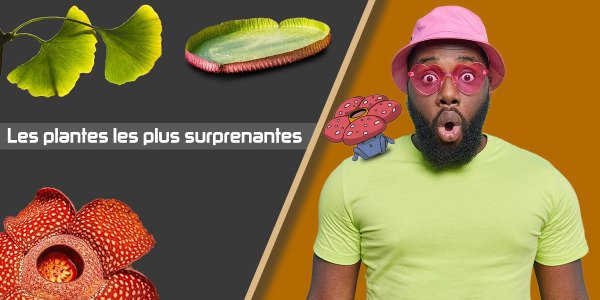 The plant with crazy growth and size

Six is the number of days it takes for a bud to grow into a giant water lily of one meter in diameter.

This aquatic plant lives in South America and in addition to having a very fast growth it is the aquatic plant which has the largest leaves in the world, up to 3 meters in diameter when adult. Some reptiles use this plant as a platform to keep warm.

It is possible to cultivate it but beware its acclimatization is difficult.

I'm going to tell you about the Rafflesia arnoldii, maybe it tells you something, indeed if you are a pokemon fan you could already see it, indeed this character was directly inspired by it.

It is the biggest single flower in the world, it can measure up to one meter in diameter and 10kg.

It grows in the rainforests of Southeast Asia, it is a parasitic plant, that is to say that it uses a host plant to develop.

It was discovered in 1818 and nobody succeeded in cultivating it. It has a very particular life cycle.

The flower is open for only 5 to 7 days, so it must reproduce quickly before it dies. To facilitate the pollination it gives off heat but especially an odor which can remind that of a "corpse" in order to attract the maximum of insects.

We still do not know how the seeds of this flower arrive in a plant which will be used as host.

It is unfortunately in danger, measures of protection are set up to avoid that it does not disappear.

If you manage to make it bloom at your place, I send you a TerraLED led ramp!

The most resistant plants

I'm going to present you 3 plants that are particularly hardy, I couldn't decide which one was the most resistant:

You have probably already seen it, it grows on trees, stones, ...

It can resist to temperatures from -70° to +70°, to radioactive radiations and to a very great drought, it only needs 2% of water to survive.

The strongest tree in history, it is the only life form that survived the Hiroshima explosion.

A few months after the explosion, buds appeared on 6 Ginko biloba trees. In addition to that the Ginko is considered the oldest tree family on Earth, it appeared during the primary air about 270 million years ago.

31 000 years, yes it is the age of the seeds of this plant which germinated thanks to biologists after having discovered them in a squirrel burrow at 38m depth.

They remained intact thanks to the climate of Siberia, the ground remains frozen constantly.

I hope you liked this blog, I say to you very quickly.